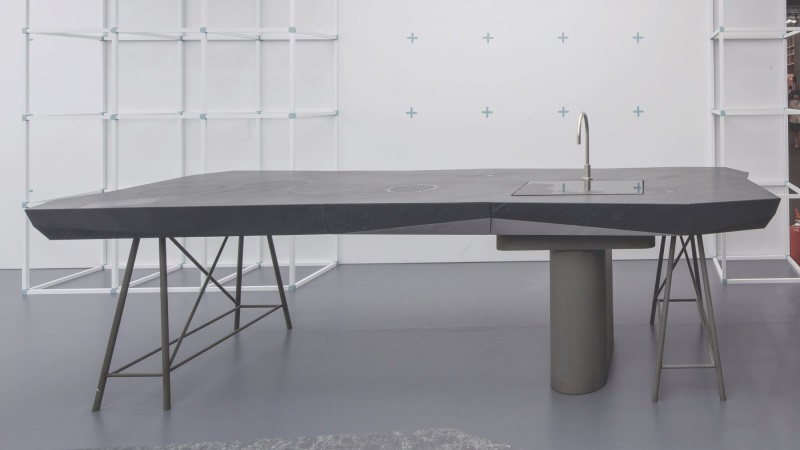 Italian design studio Tipic has created a smart kitchen countertop that integrates various interactive functions including a scale, induction cooking and a sink that appears out of the surface with a simple gesture.

Tipic’s Tuler kitchen features a kitchen counter made from a granite composite that has a number of technologies built into the stone. Conceived as a laboratory-like work bench, the counter includes a sink with a base that sits flush with the top when not in use to make it seem like part of the surface. A motion sensor is embedded under the surface of the stone, and is activated by waving a hand over it. This triggers the base to lower via a piston mechanism and the tap to activate automatically. Further gestures can be used to control the temperature and flow of the water.

“We thought about a basin that could be flat, that you can work on, and then with sensors inside the marble or quartz, with a simple gesture of your hand like magic the top opens and you have a sink,” said Tipic co-founder Tommaso Corà. “So you have not to touch anything, it’s very clean, it’s very natural, and it’s something a bit new but with existing technology.”

Also embedded into the worktop is a kitchen scale that uses pressure sensors to weigh ingredients. This is visible as an area of the stone surface with a ring of light around it. The light turns blue and then red in increments to show weights of up to two kilos. The designers hope to connect this device to a recipe app in later versions, to replicate ingredient measurements to the gram. A smaller circle indicates a wireless charging station for a phone or tablet.