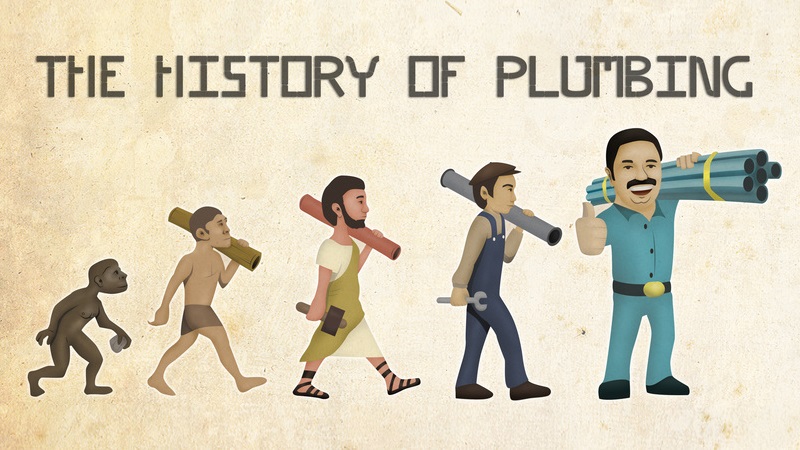 Plumbing – The system of pipes, drains, fittings, valves, and fixtures installed for the distribution of potable water for drinking, heating and washing, and waterborne waste removal. “Plumbing” also refers to the skilled trade which installs and maintains it (Plumbers).

Plumbers – Skilled tradespeople who specialise in the installation and maintenance of water systems. Plumbers are required to obtain a license from a trade or vocational school and have a background in various aspects of industrial, commercial, domestic, and communal pipe work, water heating, water treatment such as water cleaning and purification, rain water & drainage, sewer networking, water flow dynamics, the storage of water, temperature adjustment, and the dangers of water hazards.

Plumbers get their name from the Latin Plumbum, for “lead,” since the ancient Romans used pipes made from lead. The term therefore refers to the metallic element out of which their main building material is made. The use of lead for potable water declined after World War II because of increased awareness of the dangers of lead poisoning.

At this time, copper piping was introduced as a better and safer alternative to lead pipes, but the first copper pipes were made by the Egyptians, who’s plumbing process was as formidable as their building expertise. Places like China also used hollow bamboo reeds as pipes to carry fresh water and natural gas to and from the ancient salt mines.

Interestingly, Einstein, the father of modern mathematics, admired the plumber:

“If I would be a young man again and had to decide how to make my living, I would not try to become a scientist or scholar or teacher. I would rather choose to be a plumber in the hope to find that modest degree of independence still available under present circumstances.”

Not too long after this remark was published, Einstein was granted an honorary membership into the Plumbers and Steamfitters Union, A.F.L. in Washington. This made the genius, in effect, a plumber. The new title pleased Einstein, although he supposedly wasn’t looking for or expecting praise. When it comes to solving the great mathematical puzzles of the universe, Einstein would have been the first to be considered. Who would have known that he would of been the person to call to straighten out the water pipes, too?

The History Of Plumbing

The history of plumbing goes back to Crete four thousand years ago. The Minoan Palace on Crete is the oldest known structure to have sewerage and water pipes.

The Romans were the first to build elaborate systems that could transport water in and out of cities. By building aqueducts, or water bridges that conveyed water.

The first flushable toilet was not designed until the Elizabethan era and was described in 1596 by Sir John Harington, an English courtier and the godson of Queen Elizabeth I. Harington’s device called for a 2-foot-deep oval bowl waterproofed with pitch, resin and wax and fed by water from an upstairs cistern. In 1857 the first commercially available toilet paper was invented by Joseph Getty in America and in 1870, Thomas Twyford a Pottery manufacturer in England created the single piece, ceramic flush toilet.

In the year 1883, an American man by the name of John Michael Kohler invented the world’s first bathtub. He took a cast-iron horse trough and added four decorative feet to the bottom of it and covered it in an enamel finish.

In 1940 the War Production Board had severely restricted the use of iron steel and copper during World War II, forcing the use of new materials such as cast iron and plastics in manufacturing. Improved plumbing materials were thus introduced.

7 thoughts on “The History Of Plumbing And The Plumbing Trade”